Home » Investing in the US » Practical Advice » The Economic Impact of Academic Technology Transfer, a Positive Impact from Research Investment

The Economic Impact of Academic Technology Transfer, a Positive Impact from Research Investment

What do these things have in common: Google, the nicotine patch, the human papillomavirus vaccine, once-a-day HIV medication, MRI, the GPS and Warfarin – a blood thinner that is among the most prescribed medications of all time?

Each of these successful inventions got its start at a university, leveraging university technology transfer offices to move scientific discoveries from academic organisations to the commercial marketplace.

The process typically includes identifying new university research discoveries, determining if development of those discoveries might have the potential to benefit the public and, if so, protecting those discoveries through patents, copyrights and trademarks. Next, development and commercialisation strategies are formed, often with input from professionals with industry experience. After successful promotion and marketing, these discoveries are then licensed to existing private sector companies or a new company is created. The commercial licensee creates a product or service based on the technology and returns a share of resulting revenue to the university to support further research and education.

Commercialisation is a collaborative effort, and it was groundbreaking transatlantic collaboration between the University of Cambridge and the Massachusetts Institute of Technology (MIT) that led to an improved treatment of damaged joints.

Professional athletes are well-aware of the damage their sport may wreak on their bodies. So too are many of the millions of weekend warriors whose age, activities and medical conditions may one day lead to pain brought on by degradation of the cartilage in the linings of their joints. Many of these patients can no longer find pain relief from traditional treatments, but are too young for total joint replacement.

In this transatlantic alliance, MIT contributed expertise in the fields of tissue engineering and artificial skin while the team from the University of Cambridge shared their expertise in bone replacement and biomaterial innovation. The resulting technology is a porous, bioresorbable tissue that helps stimulate bone and cartilage growth when implanted into the knees and other damaged joints. This solution offers a more effective, economical and less painful alternative to traditional treatment. The ability to effectively repair these damaged joints rather than replacing them may stem the six-fold increase in total knee replacements projected by the year 2030 by the US Centres for Disease Control, and signifi cantly reduce the $36 billion cost to health services of joint replacement.

With a global economy still listless, more attention is turning to university technology transfer as source of innovation and job creation. The Association of University Technology Managers  (AUTM) has been the leader in collecting and reporting technology transfer data. The annual AUTM Licensing Activity Survey tracks licensing income and start-up activity, among other things, in the United States and Canada. The most recent survey focused on data from fiscal 2014. The results revealed that, despite stagnant levels of federal research funding, university and research institution licensing and start-up activity continued significant year-over-year growth. The number of issued patents (6,363) topped the previous year’s record numbers. Healthy increases were also reported for the number of start-ups formed (914) and the number of start-ups still active at the end of the year (4,688). Commercial products generated from academic research also grew – increasing by more than a third over the previous year to 965 new products. Net product sales by licensees of academic inventions jumped by more than a quarter over the previous year to $28 billion. 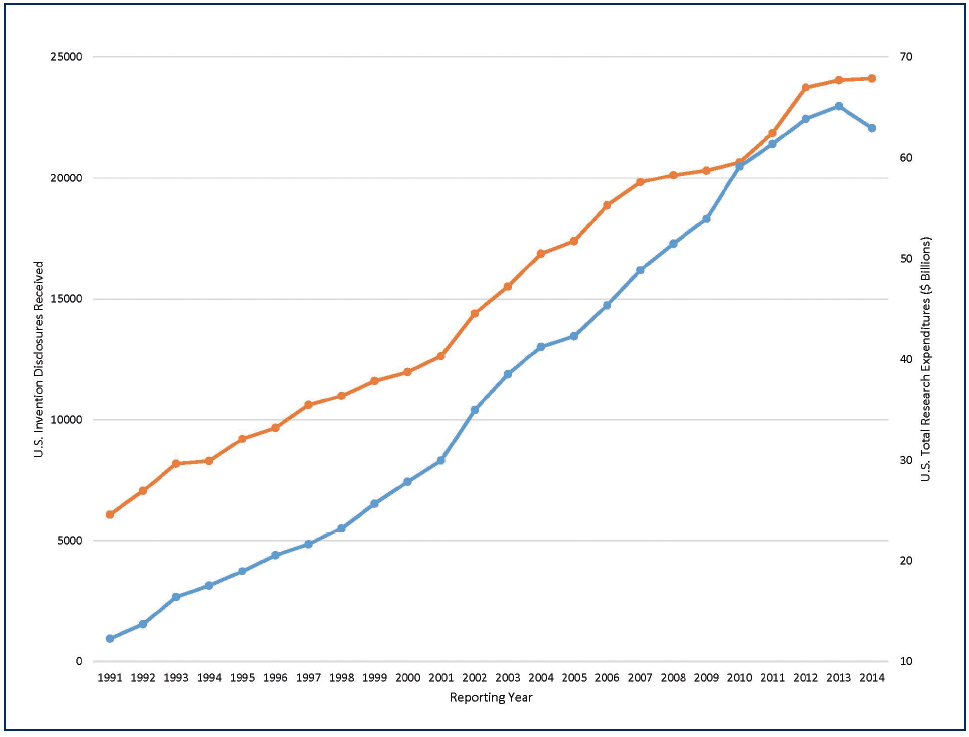 While other numbers may fluctuate from year to year, there is always one constant. As research funding increases, so does the number of promising technologies to protect and license. A look at AUTM data over the past 24 years shows that the number of invention disclosures – potentially patentable or copyrightable  discoveries, biological materials, and other types of intellectual property – correlates very closely with total research expenditures in the United States. This also holds true for Canada.

Over the years, new questions have been added to the AUTM licensing survey to better assess the economic impact of technology transfer. Fifty-one of the institutions responding to the AUTM survey provided an additional level of detail regarding their start-up activity. These institutions reported that their 1,404 start-ups operational at the end of fiscal year 2014 employed 5,335 people, an average of nearly 11 employees per start-up. Much of this  impact is local, with 77% of the start-ups formed in 2014 having their primary place of business in the home state of the research institution.

As the numbers are added up, there is little doubt of the positive impact of academic technology transfer. In March 2015, the Biotechnology Industry Organization (BIO) released a report (1) that shows that universities make a profound impact on the economy. For the 18 years studied the report showed that university/non-profit licensing supported as many as 3.8 million “person years of employment”. The impact on US gross industry output was as much as $1.18 trillion and the impact on gross domestic product was as much as $518 billion in 2009 dollars.

Despite the successes and impact of academic technology transfer to date, institutions are not relying on past models and approaches. Technology transfer professionals across the globe are diligently looking for new ways to accelerate innovation.

Universities are implementing new programmes with a focus on training faculty to collaborate with industry and to become even better innovators, assisting start-ups to find space, funding and management, and improving technology transfer practices without compromising the critical functions of patenting and licensing or underlying academic mission of research, service and education.

In terms of patent rights, it will be important to examine how legislation such as the Leahy-Smith America Invents Act (AIA) affects academic innovation in the coming years. The AIA was signed into law by President Barack Obama in 2011 and represents the most significant change to the US patent system since 1952. The law switches the US from a first-to-invent to a first-inventor-to-file patent system for patent applications filed on or after 16 March 2013. However, the AIA does not bring the US patent framework into complete harmony with the rest of the world. The law allows for one year grace periods for filing, if the public disclosure was the inventor’s own work.

To sustain the growth reported in the AUTM survey, there must be robust and sustained basic research funding to provide a pipeline of great ideas and a system of strong, reliable patent rights to ensure the academic discoveries can be protected. Such rights give the licensee a proprietary position to incentivise and justify investment in development and to ensure that the public ultimately benefits from its research investment, that the lives of people are improved, and that the world is made better by bringing this research to life.

The Association of University Technology Managers is a non-profit organisation dedicated to bringing research to life by supporting and enhancing the global academic technology transfer profession through education, professional development, partnering and advocacy. AUTM’s more than 3,300 members represent managers of intellectual property from more than 300 universities, research institutions and teaching hospitals around the world, as well as numerous businesses and government organisations.
For more information, visit www.autm.net